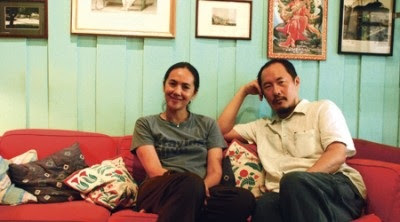 Running at almost four hours, the emotionally-charged documentary Citizen Juling is not an easy film to watch. But, through it, artist Ing K. and photographer Manit Sriwanichpoom, along with former senator Kraisak Choonhavan, hope to show the complex issues of the troubled South.


BK: What drove you to shoot Citizen Juling?

Ing K: We were struck by the news about the death of Juling, a Chiang Rai native who volunteered to be an art teacher in Narathiwat, only to be abducted and brutally assaulted by terrorists. We thought her death and her story could be the door to explore what’s happening in the South.

Manit: The violence has been going on for five years. Yet, we seem to be immune it. Over 3,000 people have died but there is not a single in-depth report on the situation. We only get daily accounts of bombings and deaths. It never really hits close to home. We wanted to show that people down South are real people just like us, not fictional characters.

Manit: It was more frightening than we had expected. We arrived in the afternoon, but the streets were eerily quiet. We felt we had landed in a war zone.

Ing K: When we went to cover the war in Cambodia, we could relax and have a beer once we crossed back into Thailand. This time, we were always worried and anxious because it’s a war with no frontline and safe zones.

BK: How did you manage to get people to open up?

Ing K: The air was filled with mistrust and suspicion. We couldn’t just wander in expecting a warm welcome. Things would be even worse if you travel around escorted by soldiers or police. But we were lucky to have Khun Kraisak, a human rights activist who has earned the trust of the southern people, accompany us. Thanks to him, we got to talk to many people, from Juling’s family to religious and political leaders. We weaved together their first-hand experiences and moving pictures in a cinema vérité style—not to tell, but to show the story.

Manit: Citizen Juling doesn’t speak, it listens. We listened to what the southern people have to say, their feelings, and then we passed them on to the audiences.

BK: Did making this movie change you in any way?

Ing K: It made me remember how amazing Thais are. Despite their loss and misfortune, they all are willing to forgive those who are responsible for their loved ones’ death.

Manit: There was one doctor who was accused of being a terrorist and was beaten up and imprisoned for two years. But once he got out, he ran for election and is now an MP. He doesn’t want other people to suffer the same fate as him.