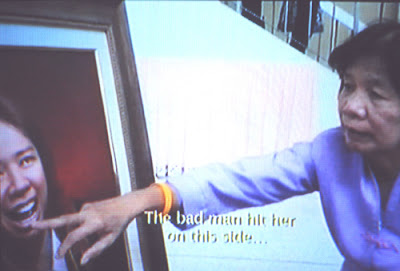 Why was Juling Pongkunmul abducted and severely beaten? Why has there been a resurgence of violence in the South?

These are questions that the nearly four-hour documentary Citizen Juling does not answer satisfactorily. But I think it really tries to. Anyway, I also think nobody honestly knows the answers -- not even the believers in whatever cause they are trying to serve by carrying out the violence.

Directed by Ing K with Manit Sriwanichpoom and Kraisak Choonhavan, what the film does succeed at doing is painting a sympathetic picture of Juling. It also gives a re-airing to forgotten incidents and aspects of the Deep South conflict, including the fatal Krue Se mosque stand-off, the massacre of the Saba Yoi soccer team, an assassination attempt on a senator and prominent community leader and a Guantanamo-like military justice system.

It's an important documentary that will hopefully go a long way towards establishing a stronger culture of documentary filmmaking in Thailand -- a place where hard questions usually go unasked and never answered, where confrontation is avoided until there is the inevitable, yet unpredictable, explosion of anger.

In the documentary, Juling is portrayed as a talented artist. A native of Chiang Rai, Thailand's northernmost province, she voluntarily headed to the country's southernmost province of Narathiwat to be a schoolteacher. She just wanted to be of service where help was most needed, her family and friends say.

One of the early scenes is at an exhibit of Juling's works, which featured many portraits of His Majesty the King -- including the iconic "drop of sweat" picture. A devout Buddhist, she painted murals at a temple in Narathiwat, and taught art at a primary school.

In May 2006, Juling and another teacher, Sirinat Thawornsuk, were dragged from their classrooms, taken to another classroom and severly beaten. Juling took the worst of the abuse and was left in a coma, with her brain stem smashed. Sirinat suffered a much lesser degree of injuries and recovered.

Recorded in 2006, Citizen Juling follows then-Senator Kraisak on a fact-finding tour of the South. With writer, artist and filmmaker Ing K directing, and artist-photographer Manit the primary cameraman, the trio stops at the hospital where Juling is in intensive care, and her parents are there. The emotions are heavy as Juling's mother points to a portrait of her broadly smiling, laughing daughter, and shows where her teeth have been kicked in and her face has been bruised.

The cameras visit the kindergarten classroom where the beating took place, and the floor is still caked with blood.

Kraisak meets with other politicians and community leaders to try and get a better handle on the situation in southern Thailand. One theme is that it wasn't as bad until Thaksin Shinawatra came to power in 2001 -- that before then there was no separatist struggle -- and it was the Thaksin government's heavy-handed tactics that led to a retaliatory uptick in bombings, drive-by shootings, attacks and ambushes.

One of the figures interviewed is a Senator Fahruddin, a community leader, schoolmaster and anti-drugs crusader. Shortly after he was interviewed, Fahruddin was ambushed by a gunman, and hospitalized with severe injuries. A bright young Muslim man took Fahruddin's senate seat, and he tells about his arrest and harsh treatment under the military's justice system.

There's a look at the civilian-run courthouse in Pattani -- a tiny building that is woefully inadequate for the number of cases it must handle. Outside, Kraisak meets with wives of men who were killed at Krue Sae. Where is justice for them?

Kraisak, Manit and Ing K also trek north, to Chiang Rai, for talks with the "Akha prince", and the conversation drifts to Thaksin's drug war, in which extrajudicial killings were the norm, as well as the marginalized hilltribe people.

The film even hits Bangkok, opening at the beginning with a look at the sea of yellow shirts who came out to the Grand Palace in June 2006 to celebrate the 60th anniversary of accession of His Majesty the King. And that's another thing that's striking about this film -- it captures the ubiquity of the monarchy in people's lives, where other films studiously ignore it.

A documentary that covers Thai politics wouldn't be complete without a look at the September 19, 2006 coup that ousted Thaksin, and so Kraisak is followed by the camera crew into the carnival-like atmosphere in Bangkok, where people are posing for pictures with the army's tanks.

Kraisak is visibly disgusted, noting that in the last coup in 1992 he was "hunted like a dog" and his family's assets were frozen. (His father, Chatichai Choonhavan, was ousted in the '92 coup.) But the 2006 was very nice, and nobody's assets were frozen, at least not for awhile. Kraisak is asked to pose with some folks, and he obliges them, but makes a point of saying that just because he's posing for a picture doesn't mean he's for the coup. And he doesn't smile.

The politics of Citizen Juling might cause this documentary to come under criticism. But the reality is that this documentary would not have been made if Ing K and Manit hadn't had the access the senator's presence granted them.

And, getting back to Juling -- because she's always there, even if she's in a hospital bed, hooked up to tubes -- her former teachers and other family members are interviewed. They talk about how clever Juling is, and how much of a tomboy she could be -- as a girl, she climbed trees, and once rescued a cobra from being killed by villagers. She cried when another snake was beaten. And all Juling's family and friends say the same thing -- that they aren't angry with the people who beat Juling -- they just want the violence to stop.